Wild wolves operate in an annual cycle, much like the operation of a ranch. Each season means a different stage in a wolf's biological cycle and encompasses different behaviors. Becoming knowledgeable about these behaviors and corresponding changes in behavior is helpful to selecting successful methods or tools to prevent wolf-livestock conflict.

Wolves are known as keystone species.

Two behavioral traits of wolves impact their hunting strategy - operating as a pack and assessing risk.

Are all gray wolves gray in color?
No, the term gray wolf is a species name. Gray wolves can be white, black, tan, brown, or grizzled, which is a combination of tans, browns, and black.

How long do wolves live?
The average is seven years in the wild and twelve years in captivity.

How much do adult wolves weigh?
North American Gray Wolves range from 40 to 175 pounds, with female wolves weighing slightly less than males.

How fast can wolves run and how far do they travel?
Wolves trot at 5 miles per hour, but they can run in short bursts at up to 35 miles per hour. They can travel as much as 30 miles per day hunting for food.

How many pups are usually born?
The average litter is five pups. It can vary depending on the abundance of prey, wolf population density, and the size of available territory.

How much do pups weight when they are born?
Newborn wolves weight about one pound. They are born deaf and blind.

What is the main prey of wolves?
Their main prey is caribou, elk, white tail deer, moose, and bison.

What is the social structure of the pack?
There is an alpha male and alpha female who are the leaders of the pack. They are also the most likely pair to breed. The beta wolves' are in second position and finally the omega wolf is in the lowest position within the pack.

How large is the pack size?
Packs can range from 2 to 36 wolves. Average pack size is six wolves. A pack usually consists of an alpha male, alpha female, current offspring, and a few yearlings. There also may be a few adult subordinate wolves in the pack. Wolves will usually stay with the pack until 2-3 years of age. At that time, they may choose to disperse to find a new pack or to start a new pack. Pack sizes depend on the available prey and territory. Wolf packs in Alaska and Canada are usually larger then in the lower 48 states. 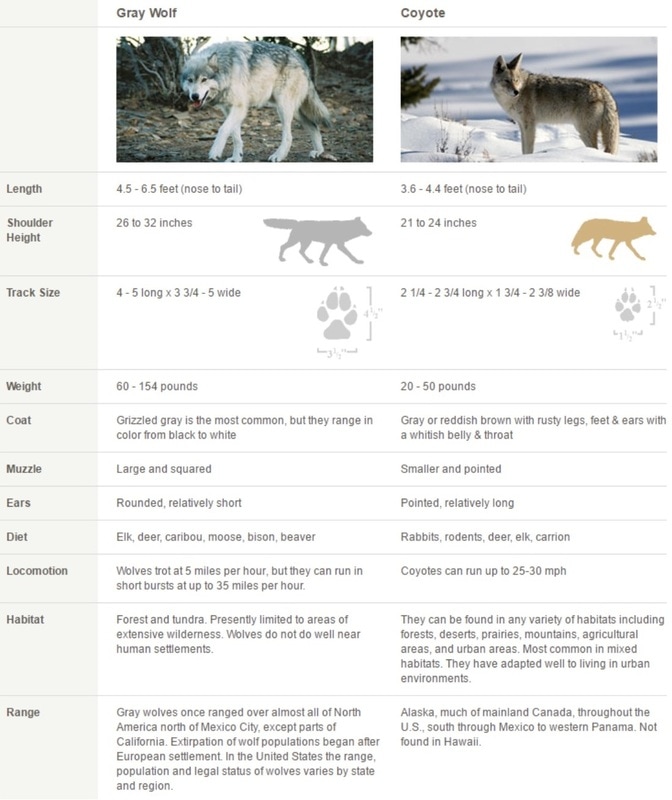